Modesty prohibits me from discussing my own postpartum experiences with sexual health--let's just say that there were some difficulties, and that they have stopped (except for the difficulty of finding time--I think most new parents will sympathize with that one being ongoing)!  However, what I found most interesting about my experience was the fact that my physician never said anything about sex after my daughter was born.  I asked if I could "go ahead," and she said yes.  That was the extent of our discussion.

Later, I had trouble finding good information online about sexual function after childbirth; most of what I read only managed to terrify, rather than inform, me.  So I thought it might be helpful to other new or soon-to-be new moms to compile some information here.

First of all, it may amaze you to know that in one survey of 484 postpartum women, only 18% of them reported receiving any information from their physicians about potential difficulties with sexual function (1).  Yikes!   Poor show, doctors.

Now, let's learn an important medical term:  dyspareunia means pain with sexual intercourse.  But different researchers  will, like Bill Clinton, play fast and loose with the definition of sex.  Some use dyspareunia to refer to pain during penetration only, while others will specifically ask women in the study about continuing pain with intercourse after penetration, or pain with orgasm.

Moving on to the numbers.  How common is dyspareunia after childbirth?  The same study of 484 postpartum first-time mothers cited above provides these numbers:  55% of women experienced painful penetration, and 45% experienced pain with continued intercourse, in the first 3 months after delivery.  At 6 months, 27% of women were still experiencing pain with penetration, and 20% were experiencing pain with continued intercourse.

[Oh, I can hear my medical student friends sounding dubious already!  They want the baseline numbers, which the study provides.  Before pregnancy, in the same group of women, 9% experienced painful penetration and 8% reported pain on continued intercourse.  These numbers are significantly different from the postpartum numbers].

Another study, this one with a prospective design, found roughly similar rates of dyspareunia.  They were also able to tell us a little more about how bad the pain was for the women in their study (2):  at 3 months postpartum, only 4% of women described their pain as "major--precluding any enjoyment of sexual intercourse."  Another study asked women to describe pain with intercourse, if they experienced it, as mild, moderate, or severe (4); at 3 months postpartum, 51% described pain as mild, 45% as moderate, and 4% as severe; those numbers changed to 65% mild, 33% moderate, and 2% severe at 6 months postpartum.

So now you are probably wondering what's different for the roughly half of women who were experiencing pain with intercourse at 3 months, and those who weren't?  Can we point to any differences between the two groups? 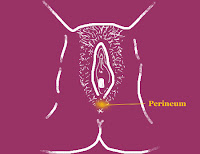 Unsurprisingly, the best predictor of dyspareunia is the presence and degree of perineal trauma during childbirth.  The location of the perineum is an area of skin and muscle between the vagina and the anus, shown to the left.

One retrospective study of 626 first-time mothers (4) found that at 3 months postpartum, 33% of women with no perineal tears experienced pain with intercourse, compared to 48% of women with second-degree perineal trauma (which means a tear in the perineum that extends through the layers of skin and into the muscle), and 61% of women with third- or fourth-degree tears (which means a tear that extends through the perineal muscles to the muscles of the anal sphincter and into the tissue underneath).  However, the rates of dyspareunia decreased to 19%, 24%, and 27% by 6 months postpartum.   By the way, in the studies that I looked at, episiotomies were associated with sexual dysfunction at rates equal to or greater than spontaneous second-degree tears (1, 4).

What about C-sections, you ask? A comprehensive review of the few studies that have looked at the question of sexual function after C-section (3) concluded that at 3 months postpartum, women who had undergone caesarean section were equally likely to experience sexual dysfunction as women with unassisted vaginal deliveries (that means vaginal deliveries where no forceps or vacuums were used), but less likely than women with assisted vaginal deliveries.  At 6 months or after, however, rates of sexual dysfunction were roughly the same, according to this review, in women who delivered vaginally and by Caesarean section.

[Are you a medical student?  You may also be interested to know that fast-absorbing sutures may cause less short-term pain and discomfort than catgut sutures (5), and that continuous suture techniques are associated with less short-term pain (up to 10 days) than interrupted sutures, and when continuous sutures were used through all layers, they were associated with less dyspareunia in a subgroup analysis (6)].

Although I find these results disconcerting--after all, breastfeeding is in so many ways good for the mother and the healthiest choice for the baby--I do not find the results that surprising.  It makes some intuitive sense to me that frequent breastfeeding is a signal to your body that you are caring for a baby and perhaps are not yet ready to get pregnant again...so vaginal dryness, or discomfort during intercourse, or low desire, may be your body's ways of keeping you from getting pregnant again.  And since a number of studies do seem to agree on this point, I am inclined to think that rather than glossing over this problem, it may be especially important for doctors who are taking care of women who breastfeed their babies to discuss ways to address sexual problems.

So far this discussion has been pretty hetero-normative, in that I've focused on penetrative, vaginal sex.  There isn't much data about other sexual practices after childbirth, but I'll briefly mention what I found.  In the retrospective study of 484 women (1), researchers asked women which activities they'd engaged in during the year before pregnancy compared to the year after childbirth.  In this study during that time period, rates of oral sex by the woman declined from 71% to 58%, while rates of oral sex by the partner declined from 72% to 52%, anal sex declined from 6% to 3%, and genital contact without intercourse stayed roughly constant, at 71% and 69%.  (It is unclear how many of the respondents were in heterosexual relationships).   I would actually love to see a study comparing sexual function in new mothers who gave birth, to mothers whose female partners gave birth, and mothers who had children via surrogates--that would be a nice way to tease apart some of the environmental factors that you can imagine might affect sexual function for new parents.

Oh, by the way.  I haven't said much here about the Big Question of when women have vaginal intercourse for the first time after childbirth.  I skipped this question because it seems like no matter what the group that is being looked at (caesarean section, vaginal delivery with or without perineal trauma), the averages are about the same--usually 5 to 6 weeks for first vaginal intercourse postpartum.  Since the averages are similar between groups of women with different kinds of deliveries--unlike the percentages of women who experience pain with first postpartum intercourse--I suspect that the timing may be more related to external factors like figuring out parenthood, relationships, and commonly given medical advice.

So what's the summary here?  Most women experience some discomfort with sexual intercourse after having a baby.  With time, most of the discomfort goes away for most women.  Breastfeeding may be associated with more discomfort during sexual intercourse than bottle feeding.   And, perhaps most importantly, given the frequency of problems with sexual function after childbirth, the low rate of physicians who discuss this issue with their patients is pretty embarrassing.  Sexual dysfunction after childbirth can be addressed:  sutures may need to be removed or trimmed, scar tissue may need to be examined, pelvic floor muscles may need to be strengthened with Kegels or with therapy, lubrication may need to be used, or estrogen cream may need to be prescribed.  There are ways to deal with the variety of challenges posed by sexual life after childbirth.  Perhaps most importantly, though, women should know that they are not abnormal if they are having trouble having sex after having a baby.  Challenges are common, and open communication between a woman, her partner, and her physician are essential.

(4) Signorello, L., Harlow, B., Chekos, A., Repke, J.  (2001).  Postpartum sexual functioning and its relationship to perineal trauma: A retrospective cohort study of primiparous women.  American Journal of Obstetrics and Gynecology, 184(5), 881-890.