We lived in Shanghai for a couple years, in a small apartment down a traditional lane.  Our building and lane housed a number of multi-generational families, and one of the great pleasures of life there was walking out every morning and seeing elderly grandparents chatting and soaking up the sun, parents hurrying off to work, schoolchildren scampering around in their sweatsuit school uniforms...and the babies.  You never really saw newborn babies (Chinese babies are usually kept at home for the first few months), but there were plenty of slightly older babies.  And many of them were especially adorable because of their butts.

Yes, their butts.  Were adorable.  How do I know this?  Because they weren't wearing diapers.  And their pants, in a wise nod to practicality, were split down the crotch, so that if baby squatted or was held over a pot or toilet, he or she could pee or poop with impunity.  Nothing would get on the pants.  They looked like this: 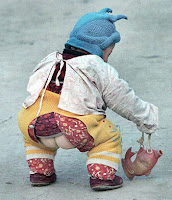 So, when I was about 4 months pregnant, I thought..."Huh.  I wonder what the deal was with those babies in China with their butts hanging out?"  Which brought me to Google some absurd combination of words:

Needless to say, most of the search results were NSFW.  But a few of them blew my mind.  Hippy parents, often in California, had seized upon this ancient practice and bestowed new names on it:  "infant potty training," "elimination communication," and "natural infant hygiene."  It made so much sense; babies don't like going in their diapers at first (that's why they often go when they're being changed)--so why do we train them to use diapers and then have to re-train them as toddlers not to use their diapers?  I was sold.

When my daughter was 4 days old, I realized that she kicked her little legs before peeing (I knew this because she would often do it on the changing table, and then pee into the air).  So I decided to hold her over the toilet when I saw her kicking.  And she peed.  In the toilet.  Then I did it a few more times that night.

The next day, my mother told me that probably, I would win a Nobel Prize for this accomplishment.  Yeah, sure, I said, me and all the mothers in China--and who knows how many other places.

Anyway, my daughter's 5 months old now, and she's well on her way to being potty "trained."  She still usually wears diapers (except for afternoon naked play time on the floor), but she hardly ever poops in them (we can go weeks without her going in her diaper).  She's increasingly using the toilet for peeing, too.  And she LOVES using the potty.  I'll put up some more posts later about the logistics of this, but suffice it to say that it's mostly about knowing your baby's habits, reading him or her well, and then giving them opportunities to go.  (Ahem. "Potty-tunities").


Leave questions in the comments and I'll address them in future posts!  If you want to read more about letting your baby use the potty, this is a good place to start.